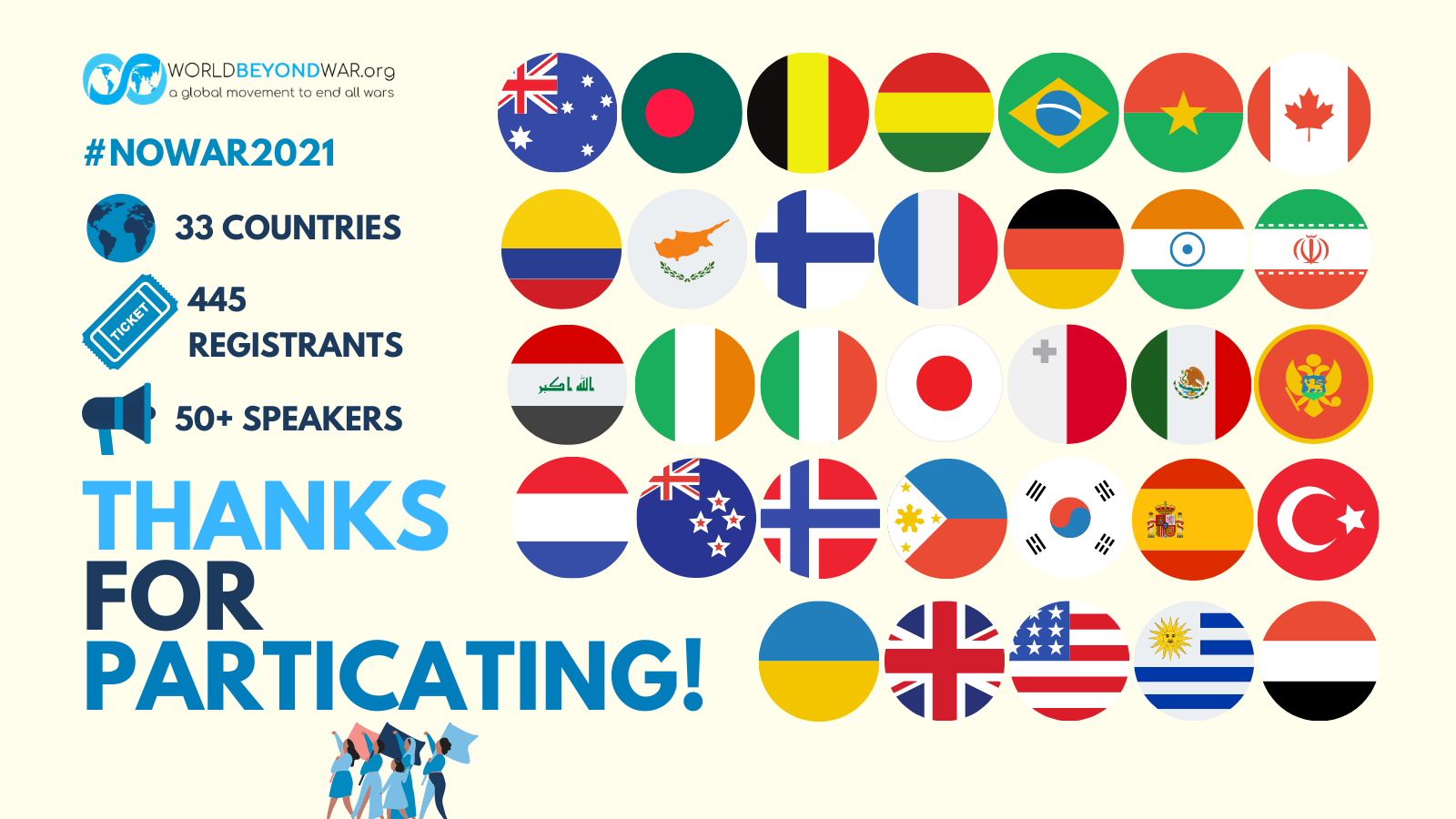 Here is the full playlist of recordings from #NoWar2021.

Below are recommended resources from our speakers, including slides, websites, videos, and books, plus the video recording from their session/panel at #NoWar2021 (for those that were recorded).

Check out our new videos! 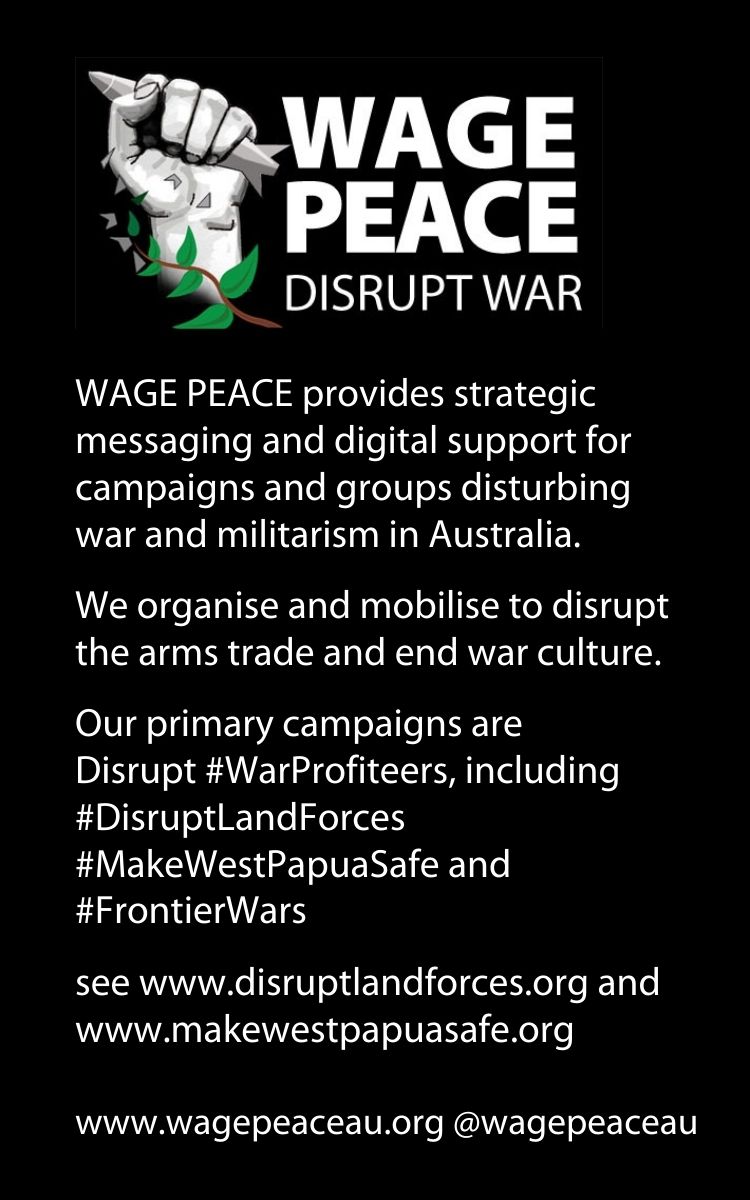 As the United States turns the corner on the global pandemic, America’s Perpetual War continues unabated. Over the last year we quarantined in the relative safety of our homes while American bombs continued to fall from planes all across the globe. Whether by America directly or by proxies, our weapons continued to kill. It takes more than a pandemic to stop this war machine.

And so beginning this weekend, World BEYOND War is hosting the #NoWar2021 Virtual Global Conference with over 400 participants from 33 countries to draw clarity and focus. Three days of international speakers, virtual networking, expos, and performances all discussing how to unravel the war machine.

The conference is called from Weapons Fairs To War Zones, an ominous title detailing how we market our weapons of death in “friendly” fairs, as if they were new kitchen appliances, and then ship them off to bring violence and death to those we have never met.

An easy to use conference platform allows for discussions with dozens of organizations working on peace and non-violence as well as opportunities to connect one-on-one to discuss local peacemaking.

The organizations are diverse, touching on everything from war tax resistance to weapons in space to nuclear power and militarism‘s enormous bootprint on the environment.

It is 3:30 now and the Land Acknowledgment with Shannon Chief is about to begin. A fitting to way to begin this conference dedicated to the dignity of people and land across this world we all must learn to peacefully share.

And so we now dig deep in the earth exhuming death in the form of rare earth elements. We mine death. We are hard at work mining death so we can drop it from the skies. A Race for Rare Earth Elements is on. Aluminum, copper, magnesium, chromium, mercury, nickel, uranium, cobalt, tin, beryllium, tellurium. The powers of the world are after them. And apparently, but not surprisingly, they take no prisoners.

Panelists Daniel Selwyn, Bianca Mugyenyi, Hamza Shalban, and David Swanson spoke of the links between mining industries and the military, of how the armies of oppressive governments act as corporate special forces protecting businesses which hollow out the earth to increase profits, satisfy shareholders, and enlarge market share all in the pursuit of building bigger and deadlier weapons.

Mining sites are now like war zones. Murders, abductions, and imprisonment of those resisting the mining companies are common corporate practices. The military works fist in glove with the mining companies to put down protests. It is, as Daniel Selwyn stated, a Martial Mining Cycle.

Is this truly the best use for these rarest of elements? To take what the earth created deep in its womb and turn it into death? Could we not build a world of abundance instead? Why this mania for mining death? And what of the empty holes we bored into the earth digging for these rare elements? They are, no doubt, open graves. We can place our national anthems in them, as well as the scores of dead.

Tonight‘s panelists spoke with sadness, particularly Hamza Shalban, a Yemeni citizen who has endured a six year killing campaign waged by the Saudis and funded and armed by the United States and Canada. But the panelists also spoke with hope. It is, after all, up to us. The companies are not going to stop. Our governments are not going to stop. That is why they were speaking tonight. That is why this conference is happening this weekend. A change in culture is needed, a move from militarism and mining to magnanimity and mercy. A move toward mindfulness of exactly what it is we are doing with our enormous power. A heavy load for sure, but one we have to shoulder.

Closing Thoughts On The NoWar2021 Conference

Think of it. For three days we talked of peace, nonviolence, disarmament, and divestment. Three days identifying specific, practical steps to rid this world of war and create a new global security system. Activists, educators, performers, and citizens from around the globe connecting, committing, sharing thoughts and experiences, ideas and blueprints on achieving a viable and lasting peace. What a good thing to do in a dangerous time.

Think of the ground we covered: From a discussion of mining rare and deadly elements deep in the earth to missiles sailing in space; from divesting a municipality’s pension funds in weapons industries to permanently closing military bases; from the savage sanctions against Iran to shutting down domestic weapons expos; from war’s ecological impact to war tax resistance. We opened the conference with a poem and closed with a plea, an urgent plea to convert to a peace economy before it is too late. It can be done. We saw the roadmap this weekend.

My biggest takeaway from the conference? How war and the environment are inextricably linked. The bootprint of American bases, all 850 of them across the globe, doesn’t just raise tensions and increase the likelihood of war, it devastates the environment too, locally and globally.

Our military-industrial complex mines rare minerals from the land (often indigenous lands) which we then convert to weapons and deploy against other indigenous lands and people. A monstrous cycle with the poor and defenseless bearing the brunt.

And then there is our military’s carbon emissions. It chokes the world. Literally. The military is the single biggest institutional carbon emitter of all, burning up ungodly amounts of fossil fuel and belching it out. Ships, planes, rockets, tanks, armored vehicles. Consuming, destroying, and polluting.

And so, War and The War on the Environment are one. Inextricably linked. Deadly bedfellows. We must say this in every conversation about peace, security, and the environment.

For three days we spoke in hopeful and ambitious terms, while still being practical and specific. The work isn’t easy. As one speaker said, rocket science is easy compared to peace. But hard work doesn’t mean impossible work. It means having a plan, a process, a network, a global collaboration. That’s what was offered this weekend, in 2021, in the midst of a global pandemic that reminds us of our interconnectedness and interdependence, at a three day Conference where we forcefully and relentlessly said No to War.